Should cutting corners be blamed for Miss Universe 2015 pageant blunder? 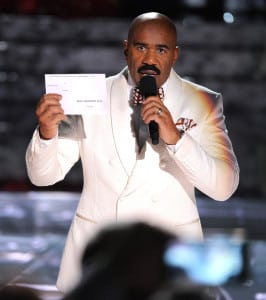 Signs and symbols are all around us. We see it everywhere so much so we barely recognize some of the most important ones in our daily lives, such as the words we speak. Businesses design various signs and symbols to suit their desired images and to appeal to customers. Graphic Design in particular utilizes the eyes. Branding studies has revealed that colors affect emotions and dispositions towards signs and symbols. As you can probably guess a lot of thought is put in to tailoring advertisements, logos, business cards and even websites to appeal to a specific demographic. Some organizations think it is wise to neglect design because a good design can be pricey. However cutting corners in constructing an appropriate design may have dire consequences.

Steve Harvey made a grave mistake while hosting The Miss Universe Pageant. He mistakenly read the name of Miss Colombia, Ariadna Gutierrez Arevalo as the winner of the beauty contest. Consequently it was the Miss Philippines, Pia Alonzo Wurzbach that was truly the winner with Miss Colombia, Ariadna Gutierrez Arevalo as the runner up. Steve Harvey promptly apologized both live and via his official Twitter page for the obviously human mistake. He held the card containing the winner and runner up for the Fox cameras to see the blunder. Analyzing the card revealed some very interesting points businesses both large and small often neglect or overlook in doing designs. 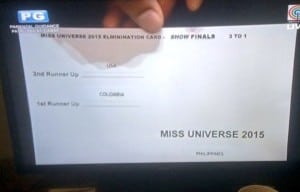 On first glance the card is barely legible. The order and spacing of the font characters were not proportionately organized. It had no flow and revealed a lack of thought on the part of the world renowned organization. Donald Trump commented on the whole ordeal stating via his Twitter account “Very sad what happened last night at the Miss Universe Pageant. I sold it 6 months ago for a record price. This would never have happened!” The pageant neglected to consider the finer points of designing that a professional would not have. The entire ordeal could have been avoided with the use of a hired professional.

It means the person who designed the card did not even bother to spell “Elimination” correctly as the card read “ELMININATION” on it. the errors had begun to happen way before Steve Harvey even started to announce the winner, the issue arouse as far back as in the planning of the pageant. The selection of the designers, the person who supervised and approved the designer’s work, and all the way up until the live announcements.

The price of cutting corners.

We all now know the great humiliation and embarrassment that not just Steve Harvey but the organizers and contestants faced last night due to a simple human error, however, this was an error that could have been prevented or mitigated against  even with the most simple of cards. This design took only ten minutes to create, very simple and yet it has what all professional designers would know to add to their designs; a hierarchy. the card is easy to follow with the eyes and the dominant text is easily identified. the designer of the Miss Universe 2015 pageant card clearly did not take user experience (UX) or user interface (UI) into consideration and the price paid for cutting corners here is a universal embarrassment.

The moral of this story is this, what is your brand, your company, your fan, clients or product worth to you? Pay a professional and get the job done correctly the first time around. It will cost more to recover from the damages caused from cutting corners initially and you will still end up having to hire a professional to get the job done correctly the second time around.

With such a poorly designed card even the best Host or MC can blunder and its really tragic to have come at a cost of embarrassment to not just Steve Harvey, but the Pageant, Contestants and fan of the pageant. 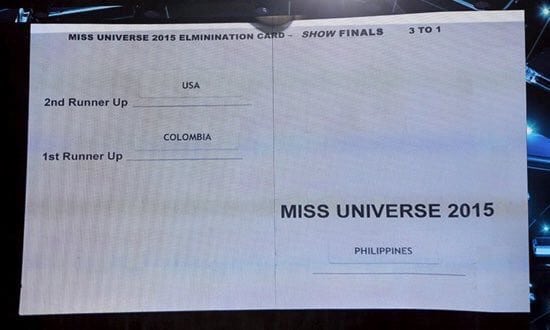